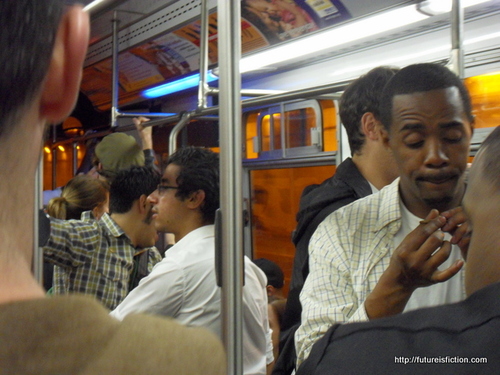 The 800 is my favorite bus in the Bay Area. This is the bus that goes back and forth from Downtown San Francisco to Berkeley and Oakland in the wee hours of the morning. You have your bar staff getting off work, one-night stands, forlorn lovers and, mostly, working-class partiers. This is the bus that runs only during the hours it is too late to catch the train. The evening is over and there are a lot of stories in those faces.

Most of the time I ride public transit I wrap myself in a book. But on the 800 I’m usually with a friend, and either too pooped or too pumped to read. Instead I find my plots in the desperation of the singles and the eavesdropped sarcasms of couples. I find my character in the swagger and slick coifs of the lovers and the heavy-lids of the night shift workers.
The first time I caught the 800 I sat behind the tall hair of a drag queen. The second time I sat surrounded by a tourist group from Eastern Europe. The whole ride home they sang Communist Party songs while a drunk hobo ingratiated himself into their clan. The most recent time I caught it was the worst. I caught it after a run-in with some bitches itching for a fight at the Denny’s, post-party (Twelves at the Mezz), post-breakfast, indeed so late it was almost early. It seemed at that hour things were a little less festive, a lot more tired and wolrd-weary. But the stories were still there.

by Karma time to read: 1 min
All Neologisms
Gotta Hear This Music Crystal Castles II: A Pixie in a Blender
0