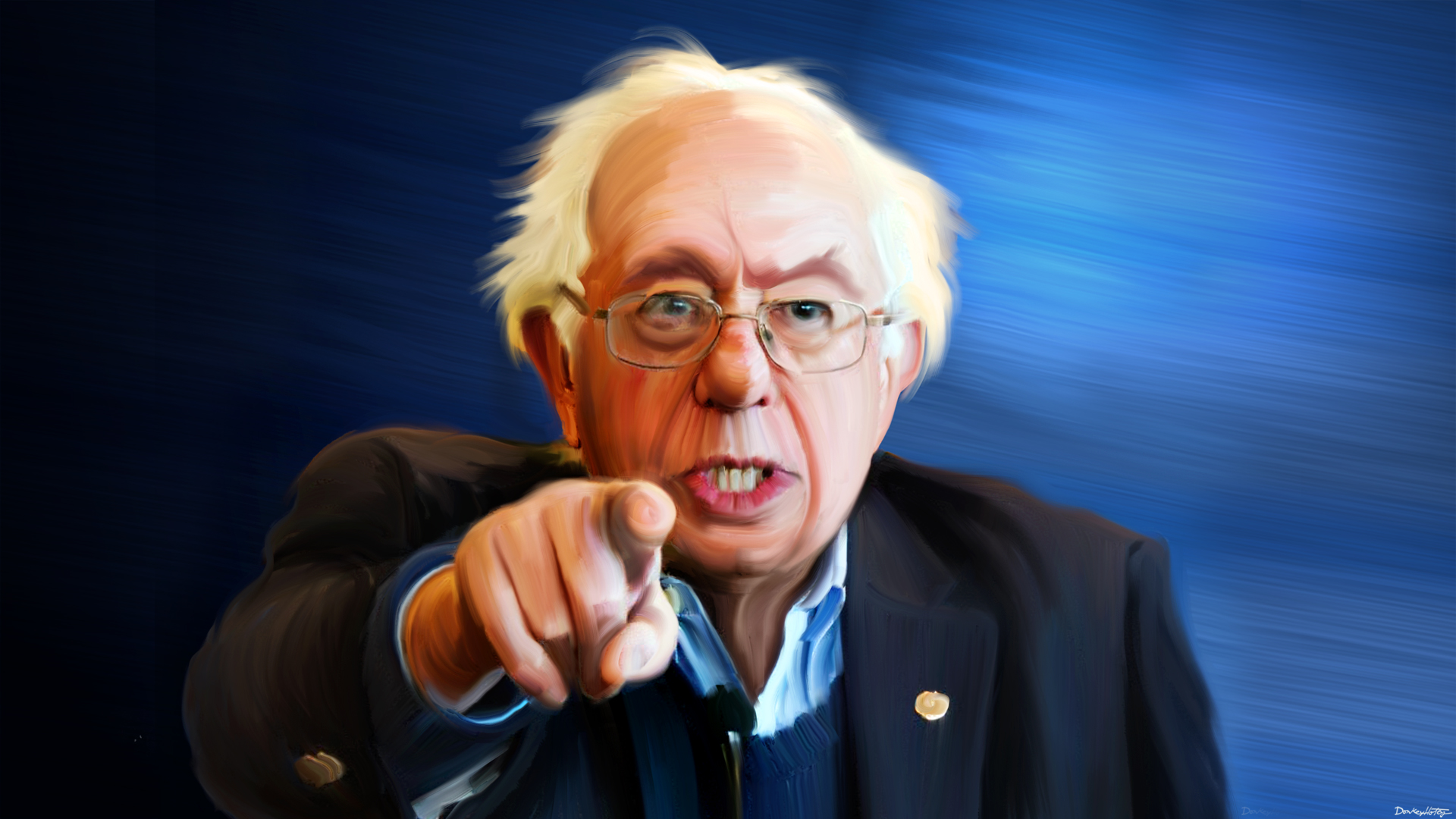 Over 100,000 Bernie Sanders supporters have signed a pledge, saying they won’t vote for Hillary Clinton. The problem in answering the question, “is there a split in the Democratic party,” is that the goal posts on what it means to be a Democrat keep moving.

Those in the establishment act like Sanders is an outsider who doesn’t belong. Take, for example, the rumor that Cenk Uygar reported, that if Clinton were to be indicted, the DNC would not give the nomination to Bernie but would instead “parachute in” Joe Biden to be the nominee. Obviously, this would make many Sanders supporters furious. It suggests that to the Democratic Party’s establishment, Sanders isn’t the second choice; he’s the never-choice. If they picked Biden, the DNC  would rather drive away Bernie’s supporters than have them win.

Though Bernie Sanders has vowed to stay in the Democratic party now for the rest of his life, he would have to live a long time to make up for the 26 years he’s served as an independent in congress. Clinton’s biggest applause lines have been around the accusation that Bernie Sanders isn’t a Democrat. Maurice Mahoney, the head of the Burlington Democratic Party in the ’80s, claimed Bernie’s goal at the time “was to destroy Democrats.” Sanders himself has accused the Democratic Party of being “ideologically bankrupt,” and (prior to this election) has claimed that he’s never been a Democrat.

Hillary is a progressive EVERY day. Bernie is a Democrat “some days.” https://t.co/GP6TpUyjEK

So there’s a clear message being sent that, despite their words to the contrary, the Democratic party doesn’t feel like Bernie Sanders is a Democrat at all.

The Democrats Need Those Sanders Votes

42% of Americans have no party preference, that’s compared to only 29% who are registered Democrat, 26% registered Republican. That means that no single party can win the election. It’s generally agreed that Sanders supporters are more likely to be independent voters than are Clinton supporters. Sanders pulls in voters who would otherwise vote for the Green Party, Peace and Freedom Party, or even Libertarian. This may be why he continues to beat Trump in nationwide polls, while Clinton’s numbers are flagging.

Whether or not those voters see themselves as Democrats, depends, in part, on what the Democratic party stands for. Independents aren’t fools, they understand a vote for a third party can’t have the same impact as the vote for one of the two major parties. These 42% of Americans don’t feel they owe their votes to Clinton (or Trump…not all of them will be progressive), because they already feel alienated enough from the establishment to register for a third party/no party.

Before Bernie Sanders entered the race, many of these people weren’t planning to vote Democrat at all. If his entry into the race brought in a bunch of new Democrats, the party’s reaction to this should be to welcome them with open arms. If they can’t do that, fine, they acknowledge that those votes were never the Democrats to claim in the first place. You really can’t have it both ways.

The recent events in Nevada only accentuate this. Why should the local Nevada Democratic party seek to disenfranchise or exclude Sanders supporters, if they see him as part of the Democratic party? Clinton supporters say bully to the Sanders delegates, that if the Nevada Democratic Party played the rules to exclude them, then it’s just too bad the Sanders supporters aren’t better at political gamesmanship. But there’s no reason that the Nevada establishment should be choosing sides in the first place, if Sanders delegates are indeed part of the democratic party. Rather, they act like they are fighting for their life, from an attack from within their own party.

This and so much more suggests that, at least to the establishment of the Democratic party, Berniecrats are not Democrats. One might say that Bernie’s calls for a revolution describe exactly this ambition to take over the party from the more progressive left, as the tea party did with the right.

What Is a Democrat?

However, if Bernie supporters aren’t welcome in the Democratic Party, where does that leave them?

The problem is that we have a two-party system. What makes it a two-party system isn’t the number of parties we have, but the way the candidates are chosen. There are more than thirty political parties to choose from in the United States. But those parties can’t gain a foothold, because the candidate with the majority takes everything. In contrast, societies with parliamentary systems award power by percentage. For example, if the libertarian party wins 30% of the vote, in parliamentary democracy the libertarians then would make up 30% of the congress. Whereas in the US, it’s winner-takes-all, no seats for second place. In order for a third party to have an impact, it would have to be the #1 overall overall winner, toppling both of the main parties…but if that were to happen (which it has, exactly once in American history) the third party would most likely take over the power of the losing party, rather than opening our democracy up to a third party system.

Therefore, if Bernie supporters are too progressive or too socialist for the Democratic party, that leaves them with no representation at all. They can join with the Democrats, or they can send a “message vote” that at best can only impact the election indirectly by pulling the main parties further to the fringe.

Because third party candidates are not likely to win, a vote for anything other than a Republican or a Democrat is seen as a “throwaway vote.” And if enough people “throw away” their votes on a more progressive spoiler candidate, the Democrats don’t get enough votes, and the GOP wins (or vice-versa).

If you’re an American, it’s *likely you already understand this. There’s a good chance you yourself have discouraged a voter from voting third party, because it will waste their vote, and if Trump wins it be “their fault.” You might have mentioned Ralph Nader.

Because the Democrats are further left than the Republicans, any progressive who wants their votes to count would have to vote Democrat. By this logic, if you believe that people should not vote for third parties, you believe that Berniecrats are Democrats by default. Regardless of who you support, there’s a logic here that can’t be denied. But there’s a problem too: it’s a paradox.

The Great Paradox of the Democratic Primary

The problem for Bernie Sanders supporters is that the Democratic party is giving them the sense that they don’t belong in its fold, while in the same breath telling them they have to vote for Clinton. Barbara Boxer gave a speech at the recent Nevada primary, where she chastised Sanders delegates about party unity, while they were protesting discrimination by party officials. If the Democratic party wants to bring Sanders voters into the fold, why were six times as many Sanders delegates as Clinton delegates excluded from the primary for irregularities on their applications? Why were voice votes used to railroad through decisions that were favorable to Clinton? Why were the lights turned off and the music turned up, to drown out the complaints of Sanders delegates? Why are there reports from Clinton delegates that Sanders supporters were treated unfairly, and that the county chair was telling officials that they had the authority to throw away delegate applications…and that most of the ones trashed were for Sanders delegates? If this is a united party that is not trying to push through a Clinton win, why would they behave this way? No wonder the Sanders supporters were angry. Barbara Boxer claimed in her speeches, “if you’re booing me, you’re booing Bernie Sanders,” because we’re all just one big happy Democratic party. But just hours later Boxer claimed that she “feared for her life” because the Sanders delegates were yelling, even though there’s video of Boxer blowing kisses to the crowd as she walked from the stage.  If Boxer really cared about party unity, why is she lying and fear-mongering to make his followers look bad? All the while the media runs a smear campaign of violence from Sanders delegates, when you can watch the entire thing on video and see not a single chair was thrown. The message: hurry up and unite around the party that is obviously doing everything it can to exclude you.

I’m starting to get pissed at HRC supporters claiming Sanders supporters “have to” support the Democratic nominee or it’s “their fault” if the GOP wins the White House. It’s irksome because it seems these same voters will argue that we shouldn’t support Sanders because his ideas are too grand or go too far… Fine then, if what I want is big, grand ideas, and the Democratic party can’t deliver them, they’re basically saying the Democratic party is not and won’t ever be our party. So why are we obligated to support them?

They can’t have it both ways. Don’t tell me I’m obligated to vote for a party if in the same breath you laugh at the notion of Democrats getting behind Bernie’s platform. And don’t claim Sanders and his supporters are really independents if you feel they owe their votes to Democrats.

*likely, but I’ve seen some voters who still don’t understand this, so I think it bears explaining.

One thought on “Is There a Split in the Democratic Party?”

Is There a Split in the Democratic Party?

by Karma time to read: 6 min 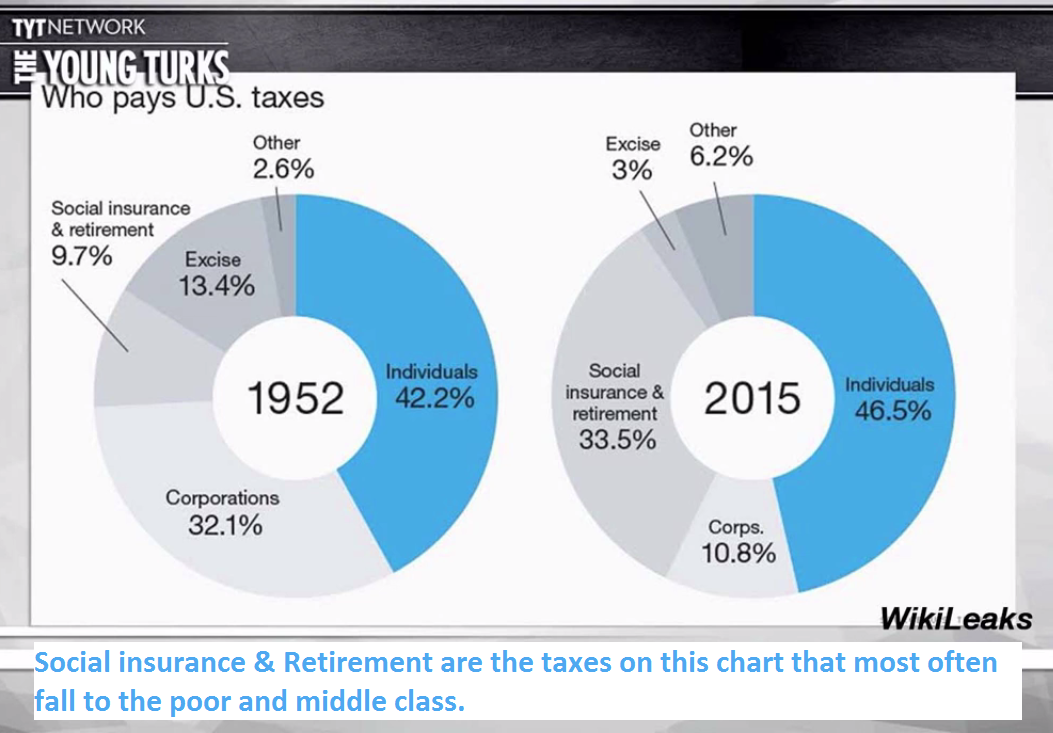 Capitalism One Chart Shows How the Tax Burden has Shifted fro…