If you know the name Steven Pressfield, it’s likely because he wrote the book behind the hit movie The Legend of Bagger Vance. I’ve never even seen that movie, much less read the book, but have been eager to read Pressfield’s much-celebrated The War of Art.

The War of Art isn’t a book on how to write.

It is a book on why to write, and a kick in the pants to get you writing now.

The War of Art is not only a book for writers. It is not even only for artists. It is for anyone who has a calling. Whatever it is that you feel in your gut like you were born to do, this book is to help you do that thing. I don’t mean the laundry or the grocery list. I mean that state where you find flow, that thing you do with effortless grace. In its action, you forget who you are, but in its completion you define who you are. 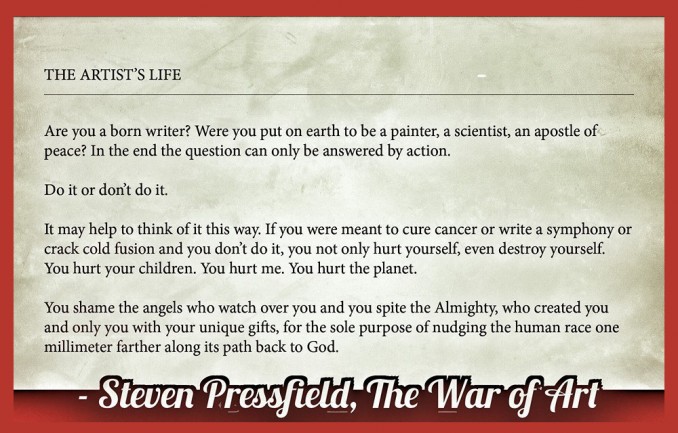 One of my favorite posts that I’ve ever written is “Overcoming Writers Block: Tickling the Muse II,” wherein, inspired by  Elizabeth Gilbert’s fantastic TED talk, I personify my relationship with the muse. I was surprised to find that The War of Art is pretty much a book-length version of the same thing. 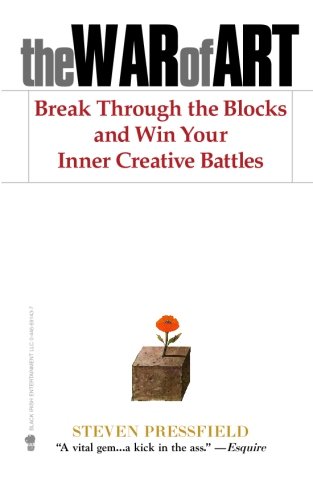 If you are the protagonist of The War of Art and the muse is your coveted lover, then the villain is Resistance. Resistance is Pressfield’s name for our tendency to fight doing the very thing we love. Resistance will tie your muse to the railroad tracks. It is your job to stop him.

The problem is, once you are good at something, it becomes easy for your ego to get in the way. You’re only as good as your last work, so your ego reminds you it would be better to never work again. That way you can’t risk creating something awful. And before we find flow, before we really get cooking, our deepest terror is that it won’t meet our expectations.

The better our last work is, the bigger our ego is. The bigger our ego is, the harder it is for us to create something new.  From Axel Rose to JD Salinger, this is why celebrated artists  stall. All you Game of Thrones fans are not helping George RR Martin finish the series with all that fan mail. To conquer resistance, he must conquer his own ego.

The War of Art is an easy read. The topic is one that many writers, and anyone who is obsessed with their own productivity, will be familiar with. He covers the battle against resistance in detail, which results in a short book. Which is fine. Read it slowly. At every moment you feel inspired, stop reading and go do the work (the fitting name of the sequel to The War of Art).

I’ll leave you with another quote. Let it sink in. Then get to work.

You know, Hitler wanted to be an artist. At eighteen he took his inheritance, seven hundred kronen, and moved to Vienna to live and study. He applied to the Academy of Fine Arts and later to the School of Architecture. Ever see one of his paintings? Neither have I. Resistance beat him. Call it overstatement but I’ll say it anyway: it was easier for Hitler to start World War II than it was for him to face a blank square of canvas.