Poor David Guetta sure has a tough time of it. Beneath the piles of babes, drugs, and awards, is a man accused. He’s accused of writing songs he didn’t write, and stealing ones he did, accused of being dead, and recently of being a fake DJ. Surely you’ve seen the YouTube video:

It’s possible that this is all a trick of the lighting in the club, but even if his mixer were turned off, I still wouldn’t buy that Guetta is a total fake. After all the guy’s been live Djing since he was seventeen. Surely if he didn’t know how to operate a mixer, someone in that time would have noticed. Even if his mixer is completely turned off, it’s possible that he had technical difficulties and had to throw on a mix CD. These things happen. 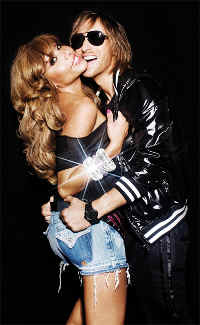 But the very existence of this video and the support it’s received tells us that for every one of Guetta’s fans there’s a hater. He may not be a fake DJ, but is David Guetta a sellout? Let’s examine the evidence.

It seems he will collaborate with anyone, on his last album alone he worked with Usher, Sia, Taio Cruz, Snoop Dogg, Nicki Minaj, Chris Brown, Lil Wayne and Timbaland. He even collaborated with a fifteen-year old kid famous for lip-syncing on YouTube …but hey, maybe he’s just a friendly guy…and all his friends happen to be the biggest names in pop music.

Actually, it’s unfair to say this is all happening by accident. Guetta was told that dance music would never succeed in the American market, so he sought out the biggest names in pop. Now you can’t turn on the radio without hearing “Tonight’s going to be a good night” or that “Sexy Bitch” song he did with Akon, or whatever Guetta’s next single is. Instead of complaining about the lack of electronic music on the Billboard charts, he saw an opportunity and he took it.

Selling out can be defined as making music for money instead of answering the call of your artistic muse. Guetta described it this way: “The more melodies and chord changes, the less good it is for the clubs, but the better it is for radio, because it makes it really emotional…Yet, what gives dance music energy and drive is that it’s hypnotic and repetitive. My battle is to find the balance between the two.” Here he’s freely admitting that he changes the music he makes to appease the radio drones.

This all comes down to the age-old battle between professional and amateur artists. Whether you’re a dancer, poet, or photographer, if you want to make money practicing your art, you’ll have to learn to craft work that fits the needs of the person paying you. If you’re a writer, this could be cutting your profanity out of the articles you write for the local paper. If you’re a film-maker it could mean using the producer’s band for your soundtrack. And any DJ who’s ever worked a wedding can tell you the booking where you snub “The Hussle” and only play underground dance music you won’t be getting a referral from the bride. Maybe David Guetta truly believes auto-tune is the sexiest thing ever, but it’s more likely he puts up with it to have an opportunity to make Lil Wayne’s next hit a little less R&B and a little more four to the floor. 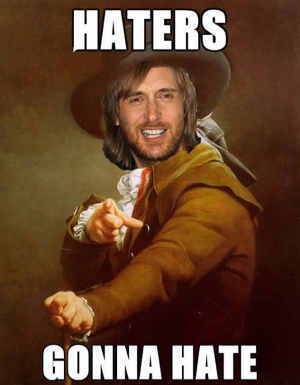 Meanwhile, those of us not out there making money can turn our nose up at those who do. Is David Guetta a sellout? Yes, and he probably has been for almost as long as he’s been making money.

It makes no difference to me if you hate on Guetta, what bother me is the idea that becoming a world-famous DJ and producer is somehow easy, if only you’re willing to sell out. The comments are along the lines of “All you need to become the next David Guetta are iTunes and swagger.” This marginalizes the hard work DJs are out there doing every day. Dammit, selling out his hard work.