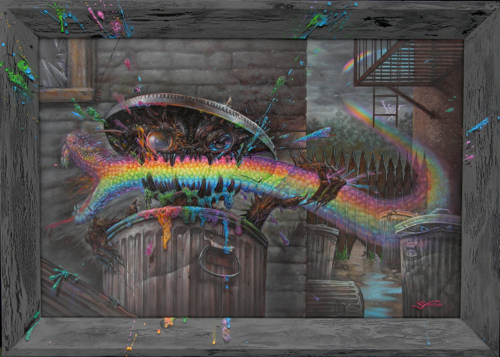 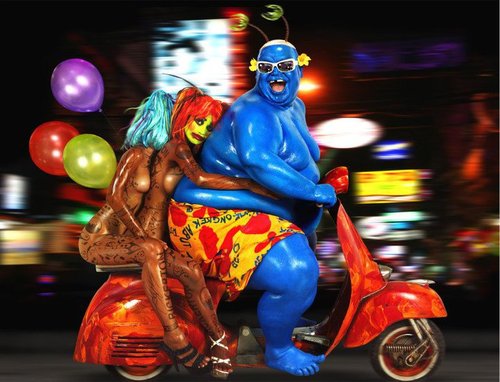 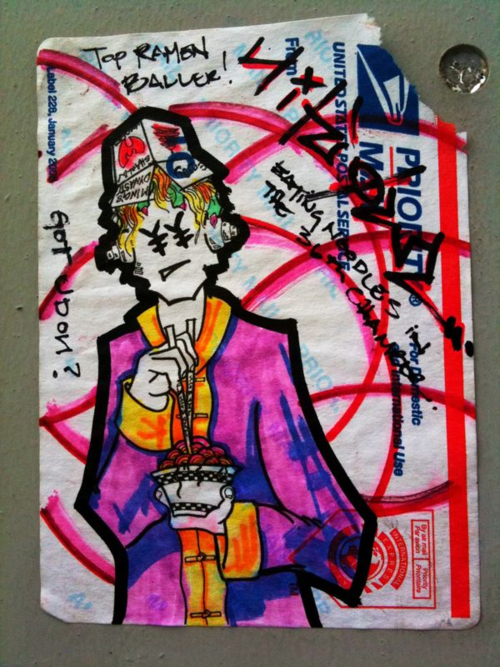 Image thanks to Feral Canvas
Rule #1
I know you thought that three foot tall velvet top hat was going to look good with your “I'M WITH STUPID” shirt, for some reason. What you didn't think about when you assessed your outfit were the three thousand people standing behind you. I bet they're all thinking “Wow, that's a fine hat! I'd much rather see that hat than Lady Gaga! The money I paid for these tickets sure was worth it to see a fine hat like that.” Oh, wait, I meant none of them are thinking that. It doesn't matter how many flowers or joker cards or taxidermied birds adorn its brim. By the forth or fifth time your hat gets in the way the of the guitarist's signature move, it's not so pretty any more.
Blood Diamonds – Lasting Love
Polarsets – Morning
Metronomy – The Look
Rogues – Not So Pretty (Feed Me remix)

As a Floridian, most bands arouse the crowd by saying how surprised they are to see a lively crowd in the netherworld of suburban hell. All day at Treasure Island the bands were raving about how much they loved our city. While every band wants to sweet talk their audience, it’s easy to believe. Treasure Island has one of the best views of the skyline and I can only imagine, as a performer, what it must have been like to be standing on that stage with water all around you and San Francisco leaping up across the bay bridge. The weather was perfect when the sunset greeted the Brazilian Girls on Saturday night. They raved quite a bit about what a joy it was to come and perform at this festival. With the clouds turning yellow and gold and a warm breeze blowing through the autumn eve, I think most of us were happy to be there.

Even though they’re not actually Brazilian, I kept comparing the Brazilian Girls to the Brazilian act Cansei de ser Sexy. Both rely on a wordly, outrageous front woman that wears ridiculous outfits. Both have fantastic keyboardists. Both have a sense of humor and a touch of sexy. Where they differ is in their experience as musicians. Brazilian Girls have that been-around-the-block quality while CSS is still drunk on their own fame.  For this reason CSS puts on a better show—there’s a ton of energy and excitement that it’s a thrill to be a part of. But Brazilian Girls were satisfying, even if their audience was mostly drawing blanks when it came to their multi-lingual songs. I’d like to see them again when they are the main act and have an audience that truly appreciates them.

Once Treasure Island was fully cloaked by the dark of night, MSTRKRFT took the stage. Seeing a live DJ-set is always like ordering the mystery meat, and MSTRKRFT was no exception. Simply because someone is a good producer doesn’t mean they are any good at throwing down tracks on the fly or anticipating what the audience is feeling. I had hoped that since half of  MSTRKRFT was once in a rock band (Death From Above 1979) that they would be more committed to playing entire melodies unlike some other DJs I won’t mention *here. And they were slightly better. But I won’t say they picked the freshest dance tracks. More importantly, they did a lot of egotistical showing off of skillful song transitions that completely abandoned playing the best part of the song. A *lot of DJ’s do this and it drives me crazy. It wasn’t terrible but I would say the DJ that wasn’t even listed on the schedule was playing more songs that made me want to wiggle and jiggle than this all-star DJ.

MGMT was the headliner for Saturday night. MGMT started their set by announcing that this would be the last time they would be able to play these songs for a long time so they were going to play the entire album from start to finish. Holy smokes, right?! This implied that they are ready to hop into the studio to start working on new material, which is great news because we’ve all overplayed their first album and all it’s subsequent remixes till the phrase “Shock me like electric eel” leads me to **violent twitching.

It also meant that we of the mp3 generation were going to hear how the album was intended to be listened to.  Hearing the whole thing played through really did give it more of a narrative quality that was more cohesive than, say, the entire ***Green Day’s American Idiot musical.  I have often described MGMT to the uninitiated as a disco-folk band. But now that I’ve seen them I’d have to say they’re a psychedelic-disco-folk band. I caught some happy folks gazing at their shoes from time to time, including members of the band. They’re not a roof-raising show but they were skilled musicians and a good time was had by all.

***which was terrible. Just so you know.