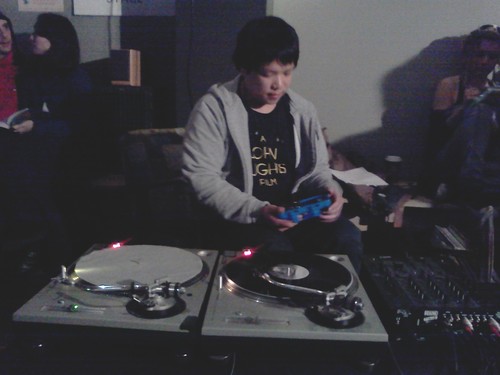 Kid Koala's space was a DJ set that explicitly stated no dancing. It was chill music, and by that I don't mean dubstep and trance, I mean like Radiohead and ambient chirping. The space was designed as a contemplative drawing session. There were barely any seats to be had, as we sprawled about with crayons and pencils and such. As much as I love to dance, I wish there were more spaces like this, ones where spontaneous communities are borne out of a creative drive. Or at least, spaces that center around something other than drinking and smoking. And did I mention the free hot chocolate? Here's a Kid Koala video so you can feel the Noise Pop chill too.

by Karma time to read: 1 min
Culture this is not art
Gotta Hear This Music Best of 2010 Dance Songs Top 25
0