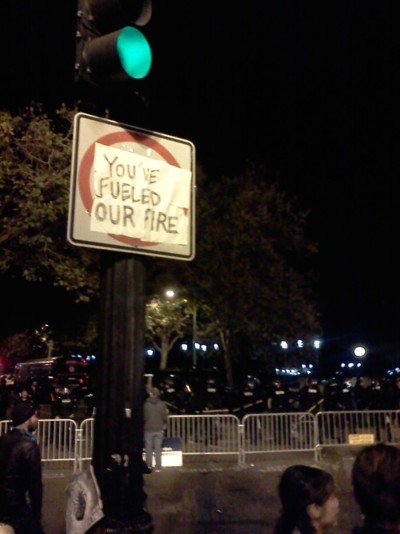 The police had slashed our tents; thrown away clothes, food, medical supplies; and arrested the protesters and the reinforcements that were ready to replace us. The police had thrown noxious chemicals and burning gas at us and shot us with rubber bullets. The police had showed their might and erected a flimsy fence to reinforce it. And as they were lying to the media about who did what and when, this sign went up.

Though their numbers had dwindled after Tuesday night’s police brutality, this sign captured the sentiment. The remaining occupiers stood in the street with a banner. They thanked me for coming. Everyone was angry. No one was daunted.

That was on Tuesday. By Wednesday at six the fences were torn down and the camp reestablished. Enough food was donated to feed everyone. A day later there was a library, school tent, and an agreement to have a general strike. My friend got six medical volunteers in a three-hour shift. Not hobos, not teenagers—People who know how to insert a catheter. Constantly there were meetings.

I have never in my life seen such a group of people so diverse, so motivated, so organized and so relentlessly determined. Regardless of what happens tomorrow, we are not quitting. We have been waiting. The time is now.

I say “us” and “we” though it’s unfair to say for I’m not among the campers. My tent wasn’t shredded. My laptop wasn’t “confiscated.” I didn’t have to sleep on the floor in a jail.

I say “us” because Occupy Oakland knows that the movement is much bigger than the campers. It is the farmers who provide the food, the bloggers and publicists  who share the news, the artists who make the t-shirts and photos, the designers and developers who build the website, the thousands who clashed with police on Tuesday. The campers represent us. They are our proxies.

Politicians count active constituents as representative of larger numbers of lazy voters. One email counts for a handful of miffed voters, a letter even more, a phone call counts for many, and you can bet if people are sleeping on your fucking lawn you can count on a crowd with torches and forks.

Posted via email from Paperback Pusher

As for how the strike would be publicized and organized, these would depend on the willingness to strike itself. The greater the willingness, the fewer the logistical requirements. How many Americans does it take to change a lightbulb? How many Web postings, how many emblazoned bedsheets hung from the upper-story windows? Think of it this way: How many hours does it take to learn the results of last night’s American Idol, even when you don’t want to know?

In 1943 the Danes managed to save 7,200 of their 7,800 Jewish neighbors from the Gestapo. They had no blogs, no television, no text messaging—and very little time to prepare. They passed their apartment keys to the hunted on the streets. They formed convoys to the coast. An ambulance driver set out with a phone book, stopping at any address with a Jewish-sounding name. No GPS for directions. No excuse not to try.

But what if it failed? What if the general strike proved to be anything but general? I thought Bush was supposed to be the one afraid of science. Hypothesis, experiment, analysis, conclusion—are they his hobgoblins or ours? What do we have to fear, except additional evidence that George W. Bush is exactly what he appears to be: the president few of us like and most of us deserve. But science dares to test the obvious. So let us dare.

When I heard that Oakland is planning a general strike for November 2nd, I went and pulled up this fantastic article written by Garret Keizer for Harpers magazine back in 2006. It is among the best essays I’ve ever read.

I will post more excerpts from this on Subversive Soapbox but you should really just go read the rest of it right now.