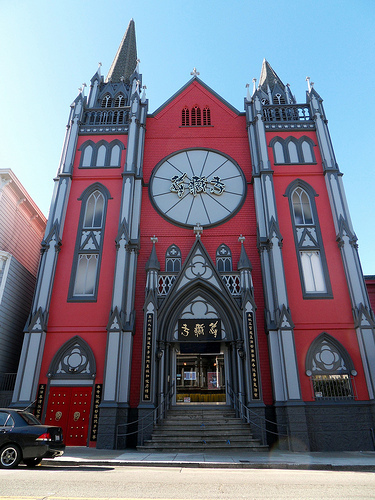 Architecturally, this is one of my favorite houses of worship in San Francisco. Not because it is the most beautiful, but because it is a Buddhist Temple occupying an old Victorian church. The brightly painted Victorians are tied to the city’s extravagant gold rush history. It also touches on the city’s long bohemianism, as the Hippies were the first to paint their Victorians in bold color schemes—the English stuck with somber monochromatic grey-white. But while the bold red paint fits in nicely on this Mission street, it is clearly chosen to mark the space for what it is today, a Buddhist temple. The influx of Chinese is also tied to the Gold Rush, since migrant workers from China built the railroads. Migration from across the Pacific is equally important in Modern San Francisco now it connected to the Brain Drain of Asia’s best and brightest to work in Silicone Valley tech jobs or prestigious Stanford and Berkeley universities. The neighborhood where this structure is planted is certainly bohemian but it is far from Chinatown and Japantown, making its neighbors mostly Central American.

I took the picture on this particular day because it was recently repainted. The building’s Buddhist remake has gilded lion-head knockers on the side doors. At the top of the steps the glass double doors are filled with a giant laughing Buddha.

The tendency to naturally blend eclectic cultural influences marks this temple not only a beautiful representation of San Francisco, but a great piece of Americana as well.