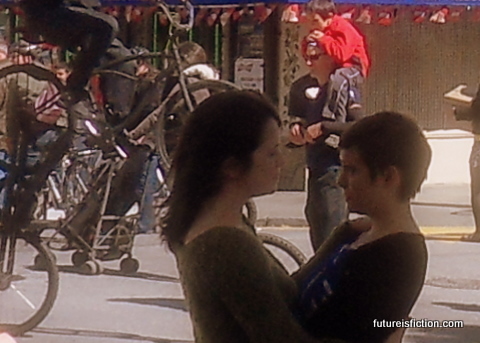 Enter civil unions. Civil unions seem like the perfect compromise to keep our grubby, queer, little hands off your precious wedding rings. But it seems obvious to me that civil unions are only going to further destroy the sanctity of marriage. Let me tell you why. 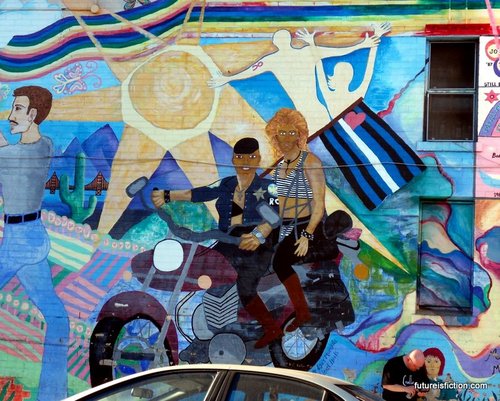 Sally Straight says, “I Can’t Wait
To Get Me One of Those Civil Unions!”

On the other hand, I love my man very much. I know that in the near future I’m not going anywhere, and I don’t need a piece of paper to know he feels the same way about me. We live together and share all the bills, and behave like grown-ups other than this whole not-being-married thing. I want him to be able to visit me in the hospital and I’d sure like to get in on that health insurance he gets from his job.

If marriage is sacred, we don’t want all that eternity mess. But what about a civil union? Well that’s not sacred, right? Isn’t that the whole point, that it gives the same rights as marriage without actually being a marriage? Well in that case, we’d just love to get a civil partnership. How long before straight couples start demanding the right to civil unions too? How long before a straight couple goes to the courts demanding the right to a civil union? How long before it becomes accepted for everyone to get civil unions, accept for some old-fashioned religious folks? I see no legal reason to stop this from occurring because civil unions by their definition don’t have the sanctity of marriage. And I can’t see how, over time, there won’t be straight couples that want the same legal rights without the promise of eternity.

Honestly, I would be fine with this scenario taking shape. The people who wouldn’t like it so much are the very people who are opposed to stopping gay marriage in the first place. By fighting gay marriage, they are creating a tier-system. Marriage can still be the high-end goal, reserved for those who honest-to-golly want to swear undying love. And maybe some of their grand-kids will go for that. More likely, the next generations will agree that a civil union is a better fit for their complicated, heterosexual relationship. They will not have any moral problem having sex out of wedlock (I guarantee this, as they seem to have no problem with it right now) and the civil union will give everyone the rights that married people have.

The only way to avoid this future, is to make marriage a right for all. If marriage had been a possibility, my queer friends and I would have had the same pressure to marry that straight couples have always gotten. If you’re really serious, why don’t you tie the knot, they’d say. Those who continued to co-habitate would be seen as fooling-around, indecisive. Queer couples would begin to question the love of their partner, if they aren’t willing to make the big commitment. All that marriage stuff would return to the status quo.

When Judge Randy Smith today argued against overturning Prop 8, he said that gay people aren’t the same as straight people because procreation is one of the purposes of marriage. I don’t disagree with Judge Smith. In fact, I’d like him to take that one step further. When you get past the legal rights (which civil unions offer) and the religious argument (which isn’t an issue for me personally) procreation is the only purpose for marriage. Raising a child is a huge responsibility and it is the sole reason I can imagine one would promise to stay with the same person forever. Everyone knows that many unhappily married couples stay together “for the kids.” And everyone knows that many teen marriages are the result of of an accidental pregnancy. In my fantasy world, anyone can get the legal benefits of a civil union, and anyone who has a child is automatically married. Knocked up? Congratulations, when’s the wedding?

Of course, we all know that’s not going to happen. Because to folks who do care about marriage, it’s really about being given permission to do the nasty. It’s about getting the seal of approval from G-O-D. And they don’t want to give us yucky queers that seal of approval, and they’re determined to destroy marriage to keep it from us.

Posted via email from Subversive Soapbox

Legalizing Gay Marriage is the Only Way to Protect Straight Marriage