This is song #3 of a playlist for my LYLAS Kat. The subject is great indie lyricists. Each week I’m focusing on the lyrics of one band and why those lyrics are worth delving into.

Since you’ve been obsessed with the Mountain Goats lately, we’ve been talking about who some of our favorite modern lyricists are. This playlist was made specifically to answer that question. Today’s band is Metric. 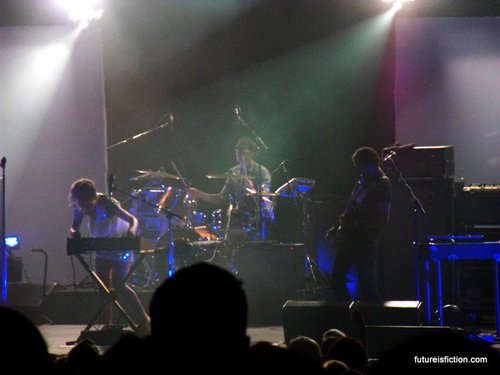 Download/listen: Metric – Patriarch on A Vespa

Lyrics to all Metric’s Songs

It’s no secret that Metric is one of my favorite bands of the decade. One may compare them to chick-fronted rock bands like Blondie or the Yeah Yeah Yeahs. But Metric wins bonus points in having captivating, socially relevant lyrics. I first got hooked on the mysterious “The Police and the Private” and became fanatic with “Patriarch on A Vespa.” I say it’s socially relevant but it’s more poetry than preaching. She’s writing about the world she sees, and as a socially aware person, this is reflected in her writing.

Take the aforementioned “Police and the Private”. She sings:

It’s clear she’s talking about some black market world. Is it drugs? Prostitution? Does it matter which, or does it matter more that the larger point is that “the whole world wants what we’re on…the police and the private, the doctor, the lawyer, the garbage collector“? The tone is desperate and dangerous. Never once does she ask why something the whole world wants is outlawed, as that would be preaching. I liken it to the Talking Heads song “Life During Wartime,” in that capturing the dangers of the lifestyle is more telling and more interesting than a sermon about the morality of those who choose to live in the underworld. The clincher in “Police and the Private” is the last line, Got to get to you the orphanage is closing in an hour. Such a haunting line. Does the character in the song live this dangerous lifestyle in the hopes of making enough money to get her child back? It’s unclear, merely suggestive that criminals lead desperate lives because there are other more innocent lives at stake.

Another example is “Gold, Guns, Girls.” The lyrics All the guns, all the gold, in the world…couldn’t get you off seem to be directed at a certain president and his cabinet that were in power when she released the song in 2009. Did she sit down to write a song about a particular politician, or does her pen naturally gravitate to such subjects because they interest her? Would the song be better if she namechecked Bush or Cheney? No, the song is better because it is about a certain type of person that Cheney happens to be an example of.

The lyrics to Patriarch On A Vespa wouldn’t be out of place in the latest urban literary magazine. I’ll print them in full so you can imagine them not in a rock song but within your favorite poetry anthology.

Patriarch On A Vespa

Promiscuous makes an entrance
Her mouth is full of questions
Are we all brides to be?
Are we all designed to be confined?
Buy ourselves chastity belts and lock them
Organize our lives and lose the key
Our faces all resemble dying roses
From trying to fix it
When instead we should break it
We’ve got to break it before it breaks us

I can imagine this getting high marks at the next Berkeley poetry slam, can’t you? But on the contrary, she sings this while playing the keyboard solo and kicking her legs in the air in total bad-ass fashion. The “it” she refers to I presume to be bullshit suburbia and when she shouts “Stop trying to fix it…we should break it” she has created a couplet not matched in the history of rocking out since The Who first shouted  “Meet the new boss! Same as the old boss!” If this song had been popular enough to hit heavy rotation on corporate radio, surely it would have inspired some chair throwing and bra burning.

Download/Listen to Patriarch On A Vespa

If you want to see some chill-inspiring rockage, check out the thrills she throws down at 1:40. It will give you a sense of why Emily Haines is one of the goddesses of indie rock:

Bonus: If this rocks a little hard for you, check out Emily Haines solo career with her backing band The Soft Skeleton. Or if you just can’t get enough, she’s also a sometimes-singer for Broken Social Scene.