Before the event starts, officials ride down the hill blaring a siren to warn pedestrians. Here’s an example of an “official” warning tricycle, this one carrying a girl dressed as Princess Leia. Note that the buns in her hair are actually big wheels. 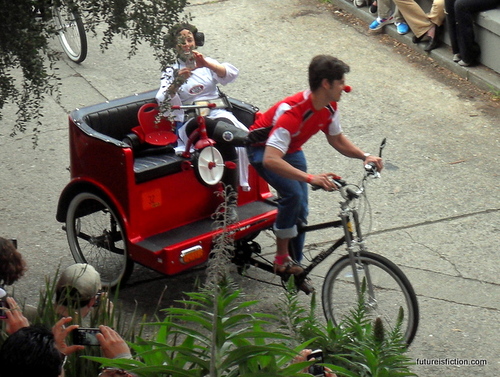 The race begins tame, letting actual children roll down the hill. So they don’t careen into the crazy switchbacks of Vermont St., ending the race in boo-boos and tears, most kids were kept on a short leash 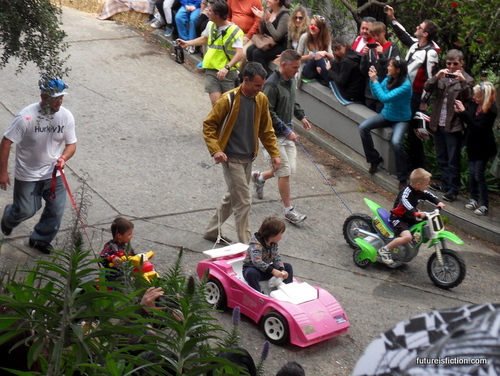 Or on a short sweater, as in this girl’s case. 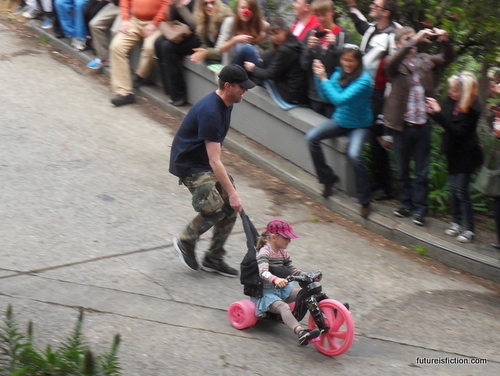 There isn’t an official winner of the Big Wheels race, but if it were up to me, the winner of the kid’s section would be this little girl. After the tame rugrats on leashes rounded the curve, this whippersnapper came barreling down in first place, riding a big wheels covered in fur. Sorry the photo is crap; my tired old reflexes simply weren’t fast enough to catch the likes of her coming round the bend, fearless and smiling.

We could hear the army of plastic wheels rumbling before the adults zoomed by. Big Wheels racing isn’t a terribly dangerous sport, but collisions are common. Usually they result from vehicles that break apart under speeds and weights they weren’t designed for ergonomic difficulties when the rider can’t figure out how to fit their body onto the tiny car. 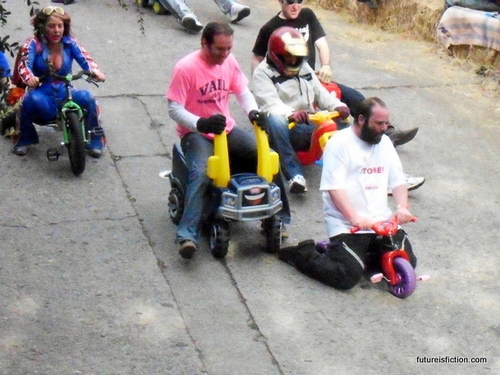 Some accidents were enabled by nosy pedestrians. In particular this drunken buffoon was amusing at first, constantly waving his flag or cowboy hat and seeking high fives. But the drunken excitement can get intrusive:

One fine moment came when Elmo accidentally did a full forward-roll. This broke his pink tricycle, but he got back up. It took a minute for him to get oriented, and when he managed to get it all put together again the crowd was shouting “ELMO, ELMO, ELMO.” 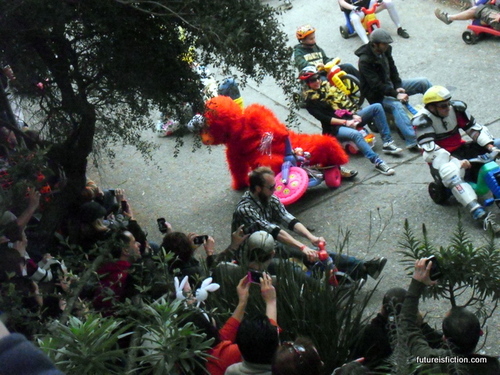 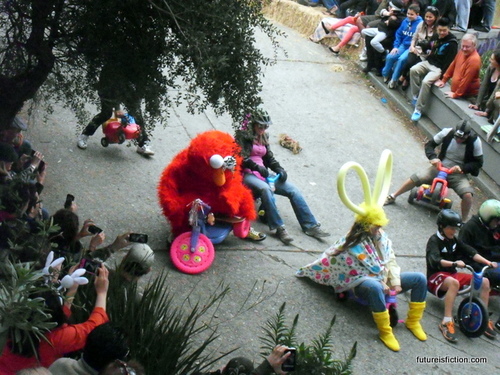 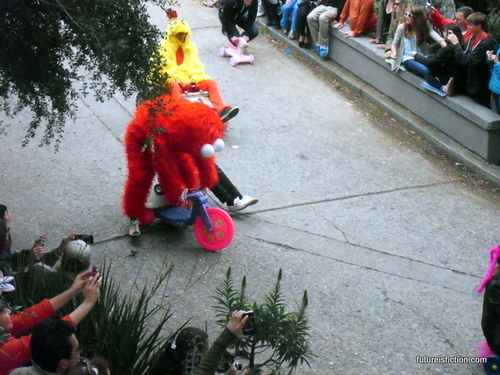 This being San Francisco, most participants used the Big Wheels race as an excuse to dress in costume.

There were Easter-themed costumes: 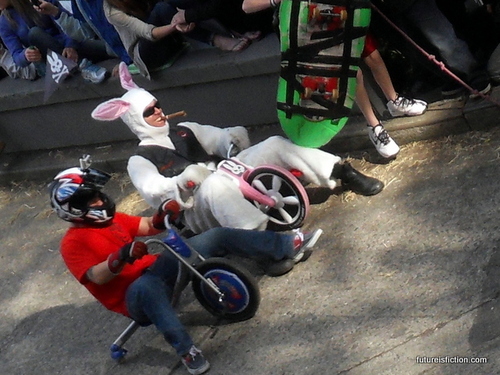 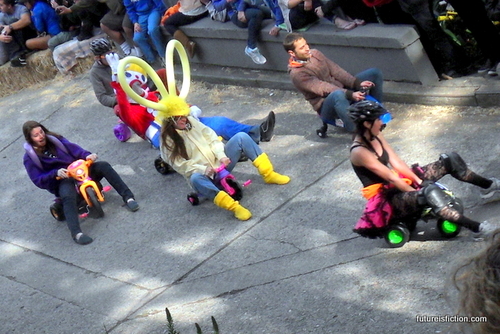 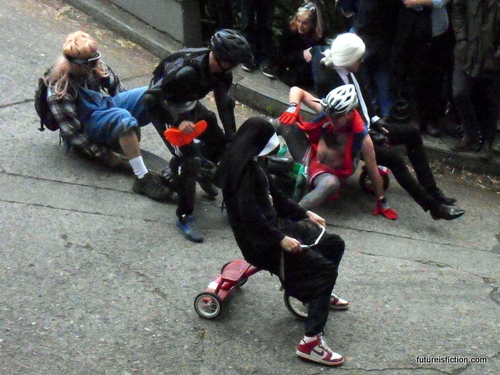 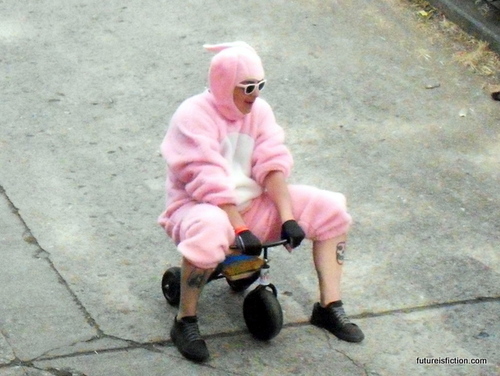 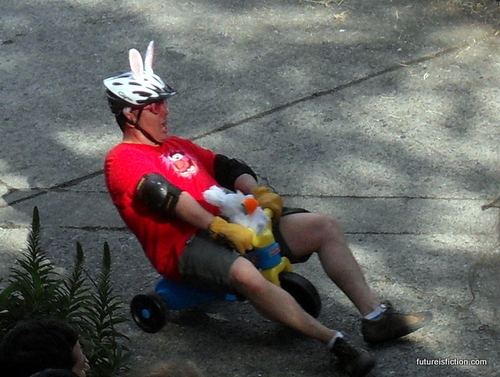 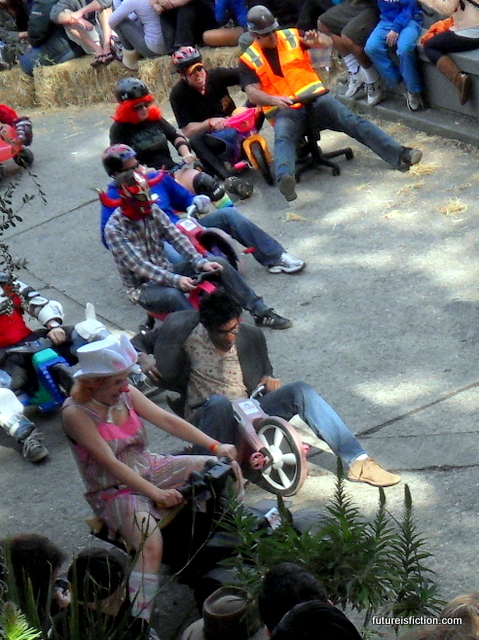 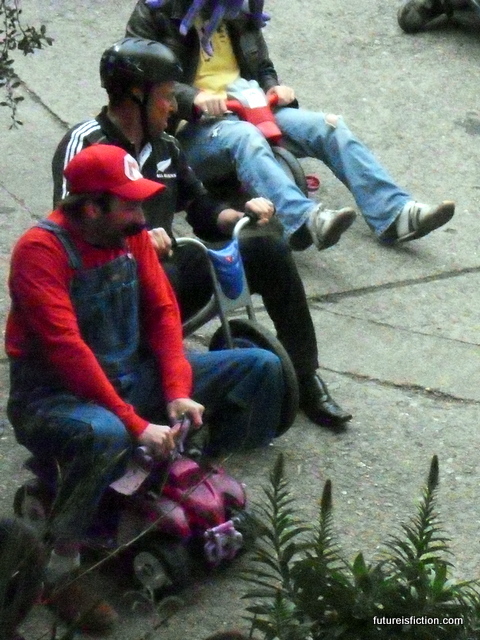 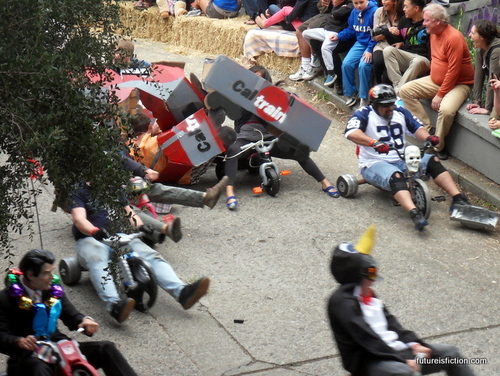 And several savvy racers who chose their ensemble to prepare them for the bumps ahead: 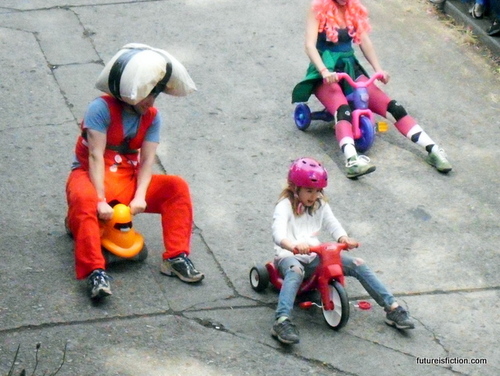 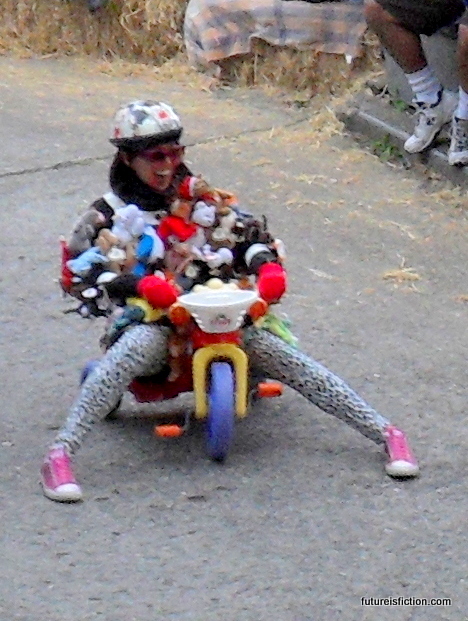 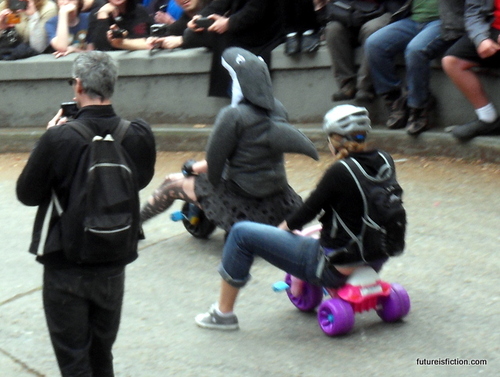 My favorite costume was this guy with the pink dress and the parasol, mostly for his determination to stay in character. No matter what curves Vermont street threw at him, he continued to wave serenely like a beauty pageant winner. 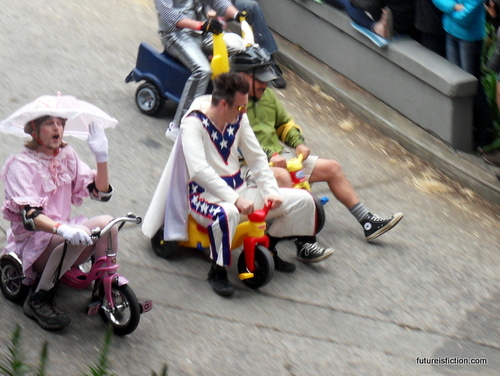 The most amazing moment was when a woman’s bike hit the edge and her wheels flew off. She was propelled into the air but just then this fellow came around the corner and CAUGHT HER. 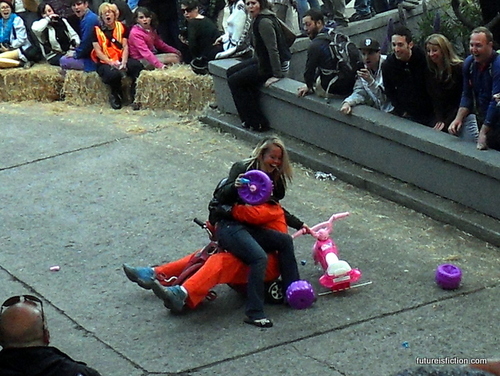 The force sent his Big Wheels spinning in circles but he neither dropped her nor lost his balance. Instead he restored her, bewildered and standing, and after receiving uproarious applause, continued down the hill. It was like how you feel when you drop a pencil and catch it before it hits the floor, except the thing he caught was a person and he was riding a tiny car down a hill and there was an audience. Triple awesome. You can’t plan a moment like that. The Big Wheels race is all about creating hijinks that make brilliant serendipity possible.