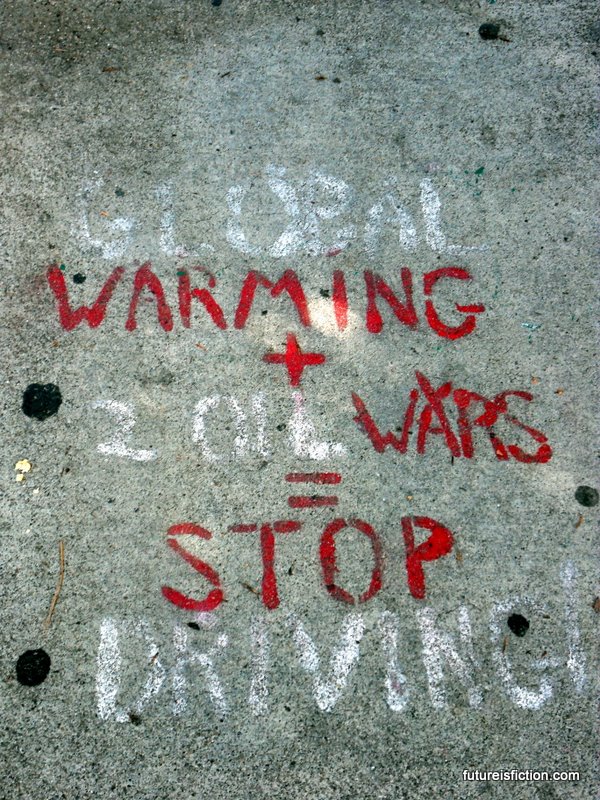 I remember when I was nine or ten how exciting it was to have a record-breaking heat wave. I took pride in the blanket of hot water that lay in the air, and in my abilitiy to withstand it. We fried an egg on the sidewalk, just because we could.
It was around this same age that I first heard about global warming. I would be in my twenties then. Such a strange thing to imagine for a child: being an adult, having responsibility for your life, knowing all about kissing and make-up and other grown-up things I was too innocent to conceive of. The juxtoposition of the wild concept of me all-grown-up and the wild concept of the end of civilization was more than my little brain could handle. At most, I thought I would be wearing sunscreen all of the time. Ever since that supple age, I have wondered if the ever-hotter summers are connected to the climate change we are bringing on ourselves. At last, I have grown into a sunscreen-lathered twenty-something and news reports daily are confirming the suspicions I’ve been harboring since before puberty.
The last month of 2006, the news and the blogs have brought one blow after another in the bad news department. December was welcomed with the flood in Somalia that has already taken more than five hundred lives. It used to be folks would blame the fates for terrible floods; now scientists are saying that this is just another sign of global warming. Then the UK Gaurdian informed me that the EPA is considering rolling back the regulations that keep lead out of gasoline, though it is a neurotoxin and a significant source of air pollution. It was equally disturbing to learn of the extinction of the Chinese River Dolphin.
The knock-out punch came from my friend Joel yesterday. He told me about the world-wide extinction that is happening faster than that at the time of the dinosaurs. I must have been sick the week they covered this in Life Science class because I didn’t know a thing about it.

“According to a 1998 survey of 400 biologists conducted by New York’s American Museum of Natural History, nearly 70 percent of biologists believe that we are currently in the early stages of a human-caused mass extinction,[10] known as the Holocene extinction event. In that survey, the same proportion of respondents agreed with the prediction that up to 20 percent of all living species could become extinct within 30 years (by 2028). Biologist E.O. Wilson estimated [4] in 2002 that if current rates of human destruction of the biosphere continue, one-half of all species of life on earth will be extinct in 100 years.”

In honor of the coming end of civilization, I’m posting my all-time favorite speech (and as a former SGA devotee, I’ve heard plenty). When I first heard this compelling bit of environmental activism, I sat in my car after I arriving at my destination, riveted by Derrick Jensen’s words.
After you have cleaned up the shiny, non-recyclable gift wrap and are wallowing in the digestive frenzy of seasonal gluttony, please take some time to give this a listen. Haven’t you seen Miracle on 34th Street enough already?

by Karma time to read: 2 min
Tech This is What My Computer Dreams About
Tech the Ever Expanding Blogosphere
0