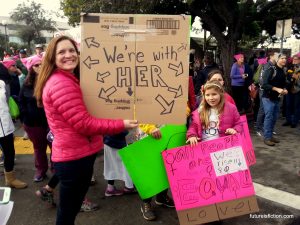 A Women’s March is by nature, a mom’s march too. Love these hand-made protest signs from the girls. They ar’t carrying their mother’s signs, they have their own ideas to express. <3

Protests have personalities. The School of the Americas protest is somber and artistic. World Bank protests are rowdy and volatile. The G8 protest in Georgia was lively, but impotent, because the protesters were so far from the action. After a few decades of being woke, it’s easy to forget this, to feel like a protest is an object that you’re required to interact with in constructing social change. But a march is not a tool, it’s a swarm.

The Women’s Marches in Oakland and San Francisco had a strange personality. It wavered between hope and exhaustion. It felt like the mother of a delinquent; she’s stayed up all night and prayed and pressed his suit but it’s a long trial and her son has been guilty before…like America, we love you, we’ll always be there for you, but you need to get your shit together. The Women’s March of Oakland felt like the mother in Eddie Murphy’s old routine, shouting, Don’t make me put on my red shoes and come down there. 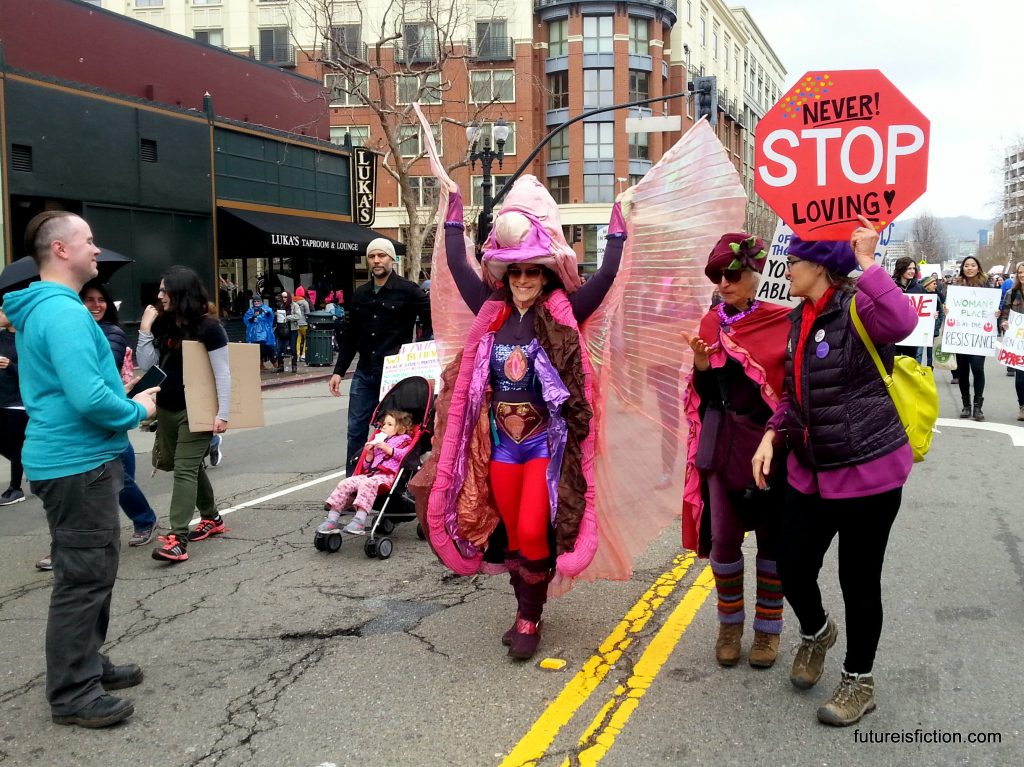 What a beautiful vulva!

My friend Jordan, an Oakland nurse, provided breakfast and a meet point at 8:30. At ten we walked down to the official start point of the Oakland Women’s March, but even standing in the block in front of that, there were women with signs overflowing blocks ahead of us. The first hour the march barely moved, because there was a never-ending influx of traffic coming of the BART trains ahead of us, creating a bottleneck. It is frustrating to be at a march that isn’t marching. Marches should be energetic. But the reason for the lack of movement was that everyone and her sister came out, so the same thing that caused frustration also created hope. This turned out to be the recurring theme of the day.

I felt it later that day at the rally in San Francisco too. This time we were the ones coming off the train, creating a bottleneck. We had to work through a massive crowd to get to a spot where we could hear who was speaking, but it was too crowded to get any closer. We weren’t even close enough to see the stage itself. So we stood in the rain, shoulder to shoulder, room to hold either a sign or an umbrella, but not both. It was equally miserable and inspiring: so many people!

New estimates put the count at 100,000. Almost everyone I know went, it’s all anyone on my feed has been talking about for days.

It was a quiet march. There were people doing chants, but sometimes the chants didn’t take off, or when they did, they didn’t travel far. People were determined to be there and excited about the turnout, but they didn’t have the energy to shout. The march expressed itself though, with the myriad clever and lovely signs. I’ve been to well-funded protests where unions and nonprofits hand out pre-made signs, and the protest becomes a sea of tidy fonts and clear messaging. But at the Women’s March, most of the signs were hand-drawn. I loved to think about these women all over town, making their signs the night before, and I loved to see women interacting and high-fiving in appreciation of these signs. 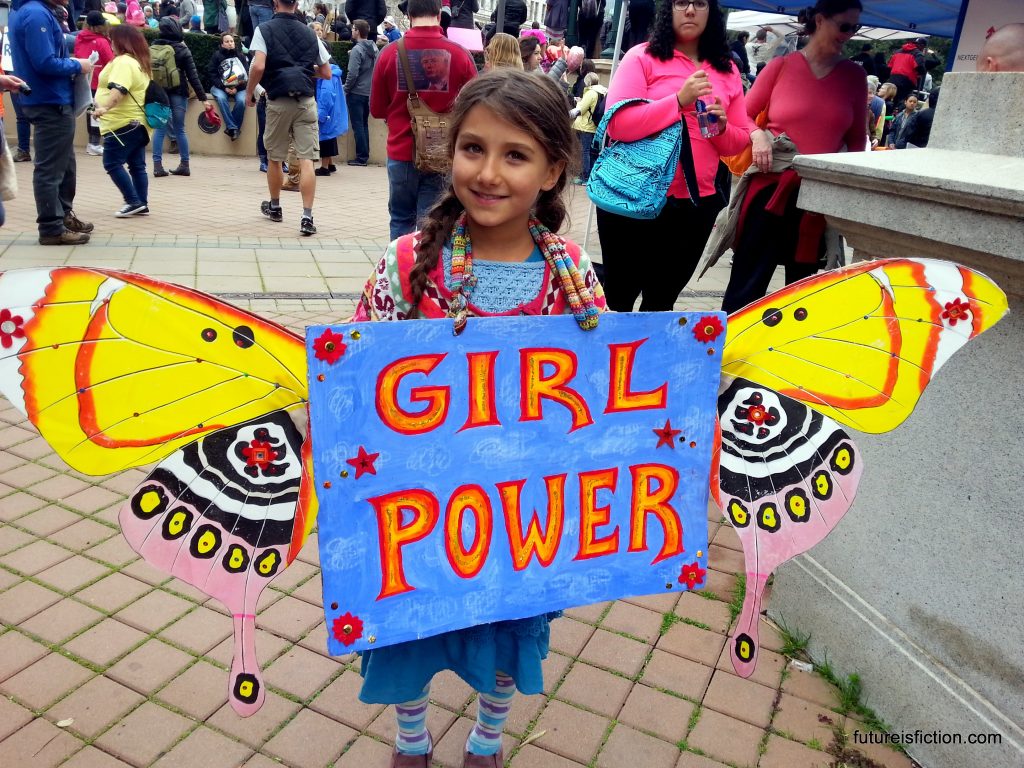 This little girl was so happy. A lifelong feminist born on this day, no doubt!

Any Women’s March is by nature a march of mothers. There were so many happy young feminists there. And a mother’s march is peaceful, safe. In fact the Oakland PD reported zero arrests for the Oakland Women’s March, and there were no arrests at the giant Washington DC Women’s March either! Zero arrests! There was no civil disobedience, no direct action, no black block…I’m not opposed to civil disobedience, but it is notable when so many people gather peacefully.

Here are my favorite protest signs from the Oakland Women’s March in the morning, and the San Francisco Women’s March that started at three.

Love this chick with her cane and her pussy power booty flap (see next).

one of those moments where I thought she put more thought into her sign than Trump puts into running our country.

We need climate action, not delusion bullshit. The latter a reference to Trump claiming that climate change is a Chinese conspiracy

Nice font! I like the idea of cutting the letters out of paper. Good way to get huge, bright letters.

These kinds of puppets are common at School of the Americas protests and anti-free-trade protests. I think if we hadn’t been at the very front of both marches we’d have seen more of the elaborate puppets.

There were a ton of kids at the march. It was peaceful and happy and all the children looked happy and unafraid.

Photo by my friend Kat Zigmont; I knew she’d want one with this mural because like me she’s obsessed with sharing street art on Instagram.

“Liar, fascist, racist, molestor, con man…” this sign lists all of Trump’s flaws, with a speech bubble that says, “I can’t fit everything wrong with this jerk on one sign!”

One of my favorites. So simple, and so true.

Who needs a pussy hat when you can wear a uterus? Photo by Kat Zigmont

Even better that’s she pregnant! One of my favorites.

The crowd around the end of the march, near Frank Ogawa Plaza

Mostly posting this so I’ll remember to look up her website later. 😉

Good idea for a rainy protest: paint on an umbrella!

I don’t know if these hats are part of the protest but they’re nifty.

Long line to get on public transit, on our way to the next march in San Francisco

Each leg of the spider’s body is one of Trump’s cabinet picks.

This meme I just always

Not a lot of cops, but damn, that’s a serious weapon. Wonder if it has rubber bullets or live ammo.

Oakland Women’s March protestor with sign: This is not the underdog I was rooting for!

A Women’s March is by nature, a mom’s march too. Love these hand-made protest signs from the girls. They ar’t carrying their mother’s signs, they have their own ideas to express. <3

Oakland cafe gets in the spirit of things

What a beautiful vulva!

Same costume from behind

“Everyone must ride” ….shivers

This little girl was so happy. A lifelong feminist born on this day, no doubt!

Not sure this is true though.

The woman in the black hat gave us post-it notes to fill out with why we are marching. The little girl in the tiger had just put her post it up when this photo was taken. Great idea to interact with the crowd!
But wait, there’s more! I don’t have as many photos of the San Francisco march at three, because I was charging my phone and it was raining. But check out the video of the dance party we passed.

The line coming up from Civic Center BART kept erupting into cheers when people at the top would see the crowd coming up the escalator.

City workers (or volunteers?) keeping the street clear, in anticpation of the 3pm march about to start.

Not a lot of cops, but damn, that’s a serious weapon. Wonder if it has rubber bullets or live ammo.

This meme I just always

This dance party looks a lot more fun than us marching in the rain.

Normally I talk to cops at protests but that gun is a bit intimidating.

Protestors marching by under umbrellas.

by daretoeatapeach time to read: 3 min
Politics If Fascism Is Right Wing, Why Were the Nazis Socia… 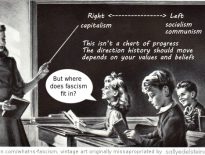 There's a growing fascist movement in America that we aren't prepared to grapple with. People support fascist ideologies while thinking...