I was meeting up with people who were already at the end of the Science March, so I worked my way through the crowd quickly. Just the same, there were so many good protests signs that I couldn’t resist snapping photos of my favorites.

The march went from the ferry building to city hall. At city hall there were booths and tables from various science organizations. There were a lot of people there, not so crowded as the Women’s March (seriously I knew more women in my city who went to that than didn’t) but the flow of people went on and on. I never did see the end of it, even though I got there late and waited around for a while outside of Embarcadero station.

Even though I was moving through the crowd much faster than the other marchers (because I was trying to catch up with my friends) I always chanted along when I passed people shouting. Because I was moving through the crowd, I was able to help spread the chants that others had started. At one point, I carried a chant to new people so far I couldn’t hear the people who started it any more. This was a lot of fun.

That’s why at tomorrow’s People’s Climate March in Oakland I’m going to focus on spreading chants. I have created a sheet of climate change protest chants that I’ll pass out to those who join me in shouting, download your own copy here.

Photos of Protest Signs from the San Francisco Science March

…and a few crowd shots, because why not?

Climate is the issue that personally got me out there marching, so that topic is heavily represented in my pics more than the march in general. It was a beautiful sunny day.

Saw a few different versions of this. Clever protest sign, no?

Lab coats in abundance, of course.

About that expanding toy thing on his head: the Hoberman Sphere.

I can’t resist the street art.

The devolution idea is overplayed, but this is brilliant.

I also like that one in the background that says “spray tans and chemistry courtesy of chemistry.”

Their hats are covered with resistors! Get it? Resistors! Science is punny.

The polar bears may go first, but this sign could just as easily have a human. #LeSign

“change the system not the climate”

“Oceans are rising and so are we”

by daretoeatapeach time to read: 1 min 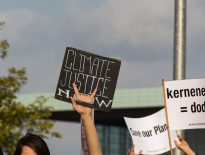 For the climate march this weekend, I made a printable list of climate chants that I'm sharing with you here....